"The whole technique of bio-mechanics lies in the careful study of the time of preparation for a certain action: of the emotional and physical state of the moment of action itself; and the resulting anti-climax of reaction" [502]

Each partner must do the homework, according to Monologue pages. Develop the floor plan, blocking together.

The same law of dramatic composition: exposition - climax - resolution. For the same -- and for the characters.

Meyerhold: "reality should be created in the minds of the spectator rather than on the stage" + Stanislavsky: "First, it has to be created in minds of actors."

I use the first page of Hamlet. I give them a single page with two guards on watch to find the beginning, the climax and the end of it. Here it is:

Elsinore. A platform before the castle.

Mark the exposition, climatic moment and resolution. Go for next page to continue the study of EXPOSITION

There is a page on dramatic structure @ Film-North: Analysis

KO. Pooh-Bah, it seems that the festivities in connection with my approaching marriage must last a week. I should like to do it handsomely, and I want to consult you as to the amount I ought to spend upon them.

POOH. Certainly. In which of my capacities? As First Lord of the Treasury, Lord Chamberlain, Attorney General, Chancellor of the Exchequer, Privy Purse, or Private Secretary?

POOH. Speaking as your Private Secretary, I should say that, as the city will have to pay for it, don't stint yourself, do it well.

KO. Exactly--as the city will have to pay for it. That is your advice.

POOH. As Private Secretary. Of course you will understand that, as Chancellor of the Exchequer, I am bound to see that due economy is observed.

KO. Oh! But you said just now "Don't stint yourself, do it well".

KO. And now you say that due economy must be observed.

POOH. As Chancellor of the Exchequer.

KO. I see. Come over here, where the Chancellor can't hear us. (They cross the stage.) Now, as my Solicitor, how do you advise me to deal with this difficulty?

POOH. Oh, as your Solicitor, I should have no hesitation in saying "Chance it----"

POOH. If it were not that, as Lord Chief Justice, I am bound to see that the law isn't violated.

KO. I see. Come over here where the Chief Justice can't hear us. (They cross the stage.) Now, then, as First Lord of the Treasury?

POOH. Of course, as First Lord of the Treasury, I could propose a special vote that would cover all expenses, if it were not that, as Leader of the Opposition, it would be my duty to resist it, tooth and nail. Or, as Paymaster General, I could so cook the accounts that, as Lord High Auditor, I should never discover the fraud. But then, as Archbishop of Titipu, it would be my duty to denounce my dishonesty and give myself into my own custody as first Commissioner of Police.

POOH. I don't say that all these distinguished people couldn't be squared; but it is right to tell you that they wouldn't be sufficiently degraded in their own estimation unless they were insulted with a very considerable bribe.

KO. The matter shall have my careful consideration. But my bride and her sisters approach, and any little compliment on your part, such as an abject grovel in a characteristic Japanese attitude, would be esteemed a favour.

POOH. No money, no grovel!

[ Another lost page! Since in this directory I try to combine Method and BioMX; read the sister page Scenes in BM ]

Questions: What are relations between your objective/obstacle and your partner's?

How to use improv for the scenes introduction and the scene study for the improv techniques? [ each acting and directing website has "SS" -- scene study page! ]

Oedipus Rex by Sophocles
The Second Shepherds' Play by Anonymous
Hamlet, Prince of Denmark by William Shakespeare
The Wild Duck by Henrik Ibsen (Doll's House)
"The Hairy Ape" by Eugene O'Neill
Death of a Salesman by Arthur Miller
Happy Days by Samuel Beckett
Bold Soprano, Ionesco
Fool For Love by Sam Shepard
The Government Inspector by Nikolai Gogol
The Three Sisters by Anton Chekhov
Miss Julie by Strindberg
White Biting Dog by Judith Thompson
Waiting for Godot by Samuel Beckett
Creeps by David Freeman
The Ecstasy of Rita Joe by George Ryga
The Importance of Being Earnest by Oscar Wilde
She Stoops to Conquer by Oliver Goldsmith
The Glass Menagerie by Tennassee Williams

[ Read plays online and about the playwrights in script.vtheatre.net ]

Building a Character,
An Actor Prepares,
Creating a Role

Next: Mise-en-scene in directing

Selections (online): The Importance of Being Earnest, Mikado, The Wedding (Chekhov), and -- 3 Sisters (drama), Hamlet. In what order? 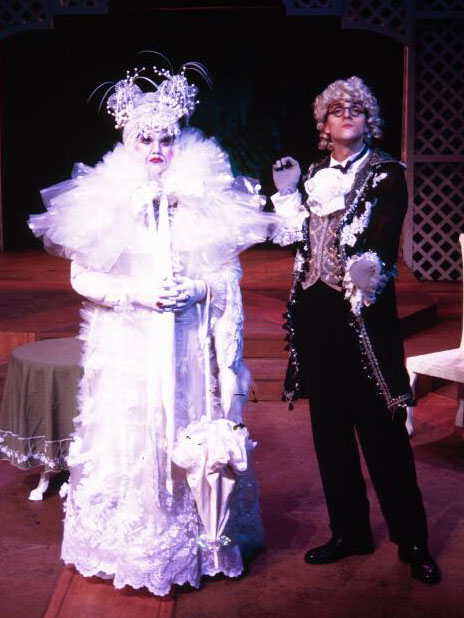 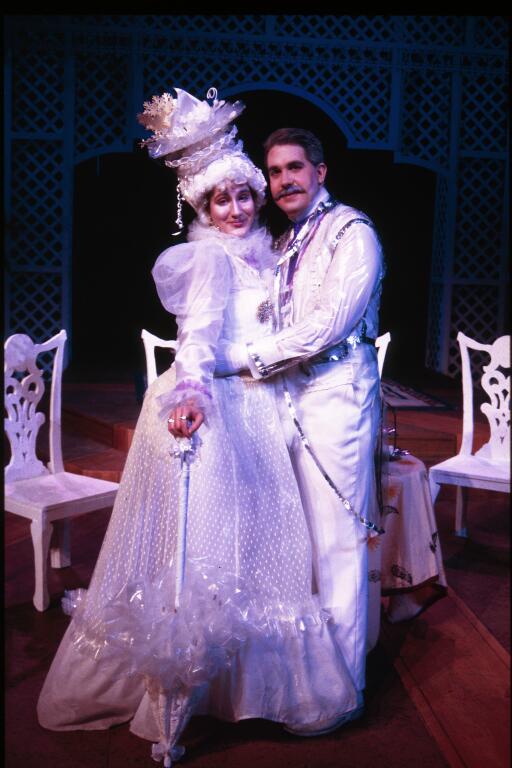 (K runs into MAYOR and DOB who enter, long pause)

MAYOR: How do you do, mister American?

MAYOR: Excuse me... It is my duty, as chief official of the town, to see to it that travelers suffer no inconveniences...

K (at first stammering a bit, but speaking loudly toward the end of the speech): It's not my fault. I'll... honest, I'll pay... They'll send money from home. (BOB peeks in from behind the door) Blame your Aeroflot, your rail road and bank system, your telecommunications, your government, not me! Why me? This is outrageous!

MAYOR (frightened): I'm very sorry. If you don't like here, may I suggest you accompany me to other lodgings...

K: What?! How dare you? By what right? I know what you mean! You cannot throw an American citizen in your jail! I'll write to Moscow, to Washington! I, I, I... Even if you came with your whole police department, I won't budge! I'll talk to the president! To all the presidents!

MAYOR: Sir, forgive me, I have a wife, little children...

K: What? Just because you have a wife and children, I must go to jail? Great!

MAYOR: My inexperience, sir, merely inexperience. Everything is just falling apart. The country, our moral principles and infrastructure. Plus the insufficiency of my income - my salary isn't enough for instant coffee and baby food. Desperation and confusion, confusion and desperation! Don't ruin our dreams! The economy needs your investment, people are working unemployed. Communists could come back any minute. Today I'm a mayor, tomorrow a party chief again! Just think what it does to my brains!

K: Why are you telling me about all that stuff? Your income is a very different matter, but you can't imprison me. No, you're not big enough for that! And I'll pay, only I don't have any cash on me now.

DOB (to Mayor): Oh, what a smoke screen! Millionaire - and has no money? He is testing us!

MAYOR: Money? Did you say - money? If you're in need of money or anything else, sir, I'm at your service. It is my civil and humanitarian duty to assist visitors to the town.

K: Really? You mean it? All right! Give, give me some money! (Taking the money, counting) Oh! Much, much obliged! I'll send dollars to you the minute I get home.

DOB (to Mayor): Praise the Lord! He took the dough. Now we are sailing!

DOB (to MAYOR): You must be bolder, sir. He wants to stay undercover.

MAYOR (to DOB): Fine. We can bluff too, as if we don't know who he really is. (To K) Dob and me - Dob is the businessman, total democrat and city councilman - since we were in the neighborhood on an official trip, we made a point of stopping in to determine whether the guests are being treated properly according to the Christmas spirit. Some mayors may not concern themselves with the welfare of humanity, but I, I insist that a good reception be extended to all races, minorities and animals. Not only because my position demands it, not because of duty, sir, but also out of my democratic love for every mortal. But may I ask, sir, what parts are you from?

K: Alaska. I am on my way home from Moscow.

MAYOR: Alaska? Our next door neighbor! Excellent! I imagine you're traveling for your own pleasure, sir?

K: No, I am a graduate student. But my dad sent for me. The old man is upset because I haven't gotten anywhere with my studies in Russia. Well, I'd like to see him scrambling in Russian universities for a while.

DOB (to MAYOR): Just listen! A student! He's tough! He's even dragged in his old father!

K: My dad is stupid and stubborn as a log. I tell him straight to his face: I must travel! Go from one university to another! I want to see the world! To have my Ph.D. in everything. Why on earth should I waste my life in Alaska?

MAYOR: Very, very true, sir. What can be accomplished in the wilds? Our town, for instance; you spend sleepless nights doing your best for the nation, sacrificing everything, and as for reward - complains and insults. This room seems a bit damp?

K: Absolutely! And the management has turned off the light. I need to read, or to write my notes, and I cannot!

MAYOR: May I suggest, sir... Not being presumptuous, sir... I have an excellent room at home, but no, I fear the honor is too great. Don't' get angry, sir, believe me, in the simplicity of my heart I offered it.

K: On the contrary, by all means. I would much rather be in a Russian family than in this joint.

MAYOR: Oh how happy I am now! And my wife will be ecstatic! It has always been my way from my earliest childhood to put the Russian tradition of hospitality before everything, especially if my guest is a man of American culture, a professor! I'm not saying this to flatter you, no, I'm free from that vice, sir. Perhaps, you would like to see how things are running in our city... the management... (BOB pops his head in at the door) Our hospital, for example. Or we might proceed to the school and observe our methods of instruction in the sciences and foreign languages. Then you might wish to visit the city prison and the police station...

K: Police? The jail? I'd rather look at the hospital.

MAYOR: As you prefer, sir. (To DOB) We shall see how things will go after lunch and a couple bottles of vodka.

(DOB runs to the door and hits BOB, who has been listening outside. All exclaim. BOB picks himself up)

It's really nothing, sir. After you, sir. (Shows K. out and follows him, scolds BOB) Just like you, constitutional anarchists! Couldn't you find a proper place to flop?

1. The entire play that the assigned scene or monologue is from must be read and analyzed for character features.

2. A well written Character Biography must be completed based on the above.

3. The text of the actual scene or monologue must be dissected for beats and objectives.

4. The scene or monologue must be thoroughly memorized by the assigned date.

5. The scene or monologue must be rehearsed efficiently using time given as well as rehearsals outside of class time. Wasted rehearsal time will reflect negatively.

6. Beats and objectives should be demonstrated in the staging and performance of the scene or monologue.

7. Use a variety of tactics to achieve their objective. These tactics should be reflected in beat changes.

8. Character analysis and concentration should be demonstrated in the performance.

9. Students will record criticism from the instructor and the class and will demonstrate improvement based on that criticism in future showings.